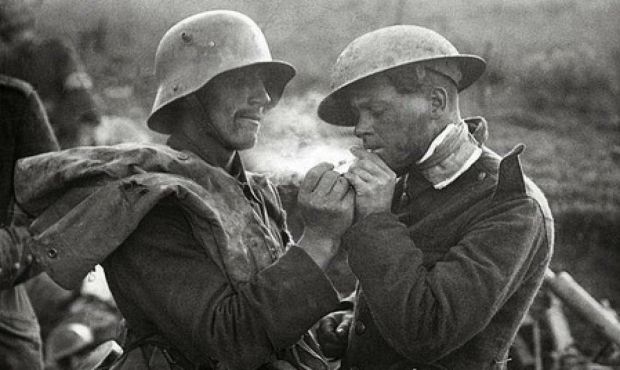 Christmas Eve, 103 years ago tonight,
the world burns burns burns like
the furnace it is, but a hard freeze
sets in after an agonizing week
of wind & rain
along the Western Front.

Tired and ragged soldiers on both sides
of a senseless, brutal war
emerge, with hands up,
from the trenches
harmonizing Silent Night
in unison
as the snow begins to fall.

For just a few hours, these war-torn
adversaries come together
as allies, as friends, as brothers.

They defy the rules of war,
ignore commands from generals
and politicians, and chisel out
their own peace. A peace not granted
by their masters. Two enemies, together,
under a bleak sky in fields of blood and bones,
laugh and sip whiskey and smoke cigars,
while sharing gifts as the grey dawn
gives way to the bloodshed again.