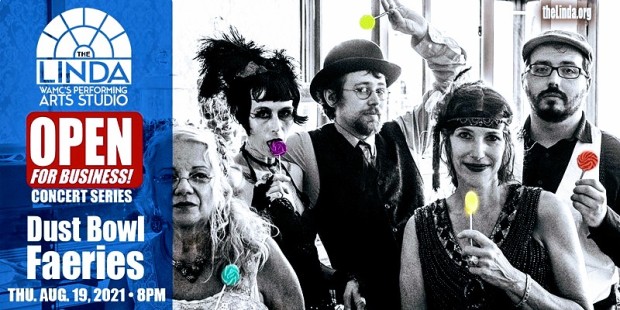 Just received the great news that I will be reading/performing some of the poems from my new book ” We Rise Like Smoke Poems Psalms Incantations” and opening for the band ” THE DUST BOWL FAIRIES” On THURSDAY,  AUGUST 19TH  8PM AT THE LINDA WAMC

*Tickets can be purchased thru Eventbrite*

I’m looking forward to seeing all of you there and I hope that you can make it.

R.M. ENGELHARDT is an American poet, writer & author who over the last 25 years has published several books of poetry including “Where There Is No Vision, Coffee Ass Blues & Other Poems”, “The Last Cigarette: The Collected Poems of R.M. Engelhardt”, “The Resurrection Waltz”, “Dark Lands” and others. Through his ideas and visions he has helped to create a large amount of the Upstate/Albany, NY spoken word~poetry scene and is the former host of the long running “School of Night”  An Open Forum-Mic For All Poets.  Co-founder of the group Albany Poets and the creator of the annual poetry event The Albany WordFest.  He currently lives in Albany, NY.

*His new book of poetry is entitled “We Rise Like Smoke” Poems, Psalms & Incantations 2021 now available on Amazon.com through DeadMansPressInk.

R.M. Engelhardt is a poet, writer and author who over the last two decades has published over 16 books of poetry including "Nod" "Logos" "Alchemy" & "The Last Cigarette: The Collected Poems of R.M. Engelhardt. The founder of the Upstate NY organization Albany Poets & the Annual Poetry Celebration The Albany Word Fest he has through his ideas & visions helped to contribute a large amount of advocacy and creativity to the Spoken Word~Poetry Capital District scene and is the former host of the long running readings Vox, Propaganda, Listen & currently is creating a new resurrection of one of the area's most well known open mics for poetry and spoken word THE SCHOOL OF NIGHT in Troy, NY held on the last Wednesday evening of each month at the incredible nightclub/speak easy bar THE BERLIN IN TROY NY. His writing has also been published by many journals such as The Rye Whiskey Review, Red Fez, Rusty Truck, Sure! The Charles Bukowski Newsletter, Thunder Sandwich, The Hobo Camp Review, Full of Crow, on the Outlaw Poetry Network & in many many others. Look for his books "WHERE THE PEOPLE'S VISION PERISHES 2020" "DARK LANDS (2019 on LuLu, Amazon & At Barnes and Noble) The Resurrection Waltz, 2012 ( Infinity Press) & "COFFEE ASS BLUES & OTHER POEMS" ( 2018 Alien Buddha Press 2018) " DarkLands" 2019 & "Where There Is No Vision" 2020 and his new book, "WE RISE LIKE SMOKE" 2021 all on Amazon.com www.rmengelhardt.com www.albanypoets.com www.gentlemanoutsider.com *All Poems, Writings & Information Contained On This Blog Are The Property & Owned By The Author R.M. Engelhardt. © 2021 www.rmengelhardt.com View all posts by R.M. ENGELHARDT POET AUTHOR WRITER