“In older myths, the dark road leads downward into the Underworld, where Persephone is carried off by Hades, much against her will, while Ishtar descends of her own accord to beat at the gates of Hell. This road of darkness lies to the West, according to Native American myth, and each of us must travel it at some point in our lives. The western road is one of trials, ordeals, disasters and abrupt life changes — yet a road to be honored, nevertheless, as the road on which wisdom is gained. James Hillman, whose theory of ‘archetypal psychology’ draws extensively on Greco–Roman myth, echoes this belief when he argues that darkness is vital at certain periods of life, questioning our modern tendency to equate mental health with happiness. It is in the Underworld, he reminds us, that seeds germinate and prepare for spring. Myths of descent and rebirth connect the soul’s cycles to those of nature.”

How to Speak Poetry

Take the word butterfly. To use this word it is not necessary to make the voice weigh less than an ounce or equip it with small dusty wings. It is not necessary to invent a sunny day or a field of daffodils. It is not necessary to be in love, or to be in love with butterflies. The word butterfly is not a real butterfly. There is the word and there is the butterfly. If you confuse these two items people have the right to laugh at you. Do not make so much of the word. Are you trying to suggest that you love butterflies more perfectly than anyone else, or really understand their nature? The word butterfly is merely data. It is not an opportunity for you to hover, soar, befriend flowers, symbolize beauty and frailty, or in any way impersonate a butterfly. Do not act out words. Never act out words. Never try to leave the floor when you talk about flying. Never close your eyes and jerk your head to one side when you talk about death. Do not fix your burning eyes on me when you speak about love. If you want to impress me when you speak about love put your hand in your pocket or under your dress and play with yourself. If ambition and the hunger for applause have driven you to speak about love you should learn how to do it without disgracing yourself or the material.

What is the expression which the age demands? The age demands no expression whatever. We have seen photographs of bereaved Asian mothers. We are not interested in the agony of your fumbled organs. There is nothing you can show on your face that can match the horror of this time. Do not even try. You will only hold yourself up to the scorn of those who have felt things deeply. We have seen newsreels of humans in the extremities of pain and dislocation. Everyone knows you are eating well and are even being paid to stand up there. You are playing to people who have experienced a catastrophe. This should make you very quiet.  Speak the words, convey the data, step aside. Everyone knows you are in pain. You cannot tell the audience everything you know about love in every line of love you speak. Step aside and they will know what you know because you know it already. You have nothing to teach them. You are not more beautiful than they are. You are not wiser. Do not shout at them. Do not force a dry entry. That is bad sex. If you show the lines of your genitals, then deliver what you promise. And remember that people do not really want an acrobat in bed. What is our need? To be close to the natural man, to be close to the natural woman. Do not pretend that you are a beloved singer with a vast loyal audience which has followed the ups and downs of your life to this very moment. The bombs, flame-throwers, and all the shit have destroyed more than just the trees and villages. They have also destroyed the stage. Did you think that your profession would escape the general destruction? There is no more stage. There are no more footlights. You are among the people. Then be modest. Speak the words, convey the data, step aside. Be by yourself. Be in your own room. Do not put yourself on.

This is an interior landscape. It is inside. It is private. Respect the privacy of the material. These pieces were written in silence. The courage of the play is to speak them. The discipline of the play is not to violate them. Let the audience feel your love of privacy even though there is no privacy. Be good whores. The poem is not a slogan. It cannot advertise you. It cannot promote your reputation for sensitivity. You are not a stud. You are not a killer lady. All this junk about the gangsters of love. You are students of discipline. Do not act out the words. The words die when you act them out, they wither, and we are left with nothing but your ambition.

Speak the words with the exact precision with which you would check out a laundry list. Do not become emotional about the lace blouse. Do not get a hard-on when you say panties. Do not get all shivery just because of the towel. The sheets should not provoke a dreamy expression about the eyes. There is no need to weep into the handkerchief. The socks are not there to remind you of strange and distant voyages. It is just your laundry. It is just your clothes. Don’t peep through them. Just wear them.

The poem is nothing but information. It is the Constitution of the inner country. If you declaim it and blow it up with noble intentions then you are no better than the politicians whom you despise. You are just someone waving a flag and making the cheapest kind of appeal to a kind of emotional patriotism. Think of the words as science, not as art. They are a report. You are speaking before a meeting of the Explorers’ Club of the National Geographic Society. These people know all the risks of mountain climbing. They honour you by taking this for granted. If you rub their faces in it that is an insult to their hospitality. Tell them about the height of the mountain, the equipment you used, be specific about the surfaces and the time it took to scale it. Do not work the audience for gasps ans sighs. If you are worthy of gasps and sighs it will not be from your appreciation of the event but from theirs. It will be in the statistics and not the trembling of the voice or the cutting of the air with your hands. It will be in the data and the quiet organization of your presence.

On Friday, January 20th Donald J. Trump will be sworn in as The President of the United States of America.

This will be a very sad day indeed. And as poets and writers everywhere we need to speak up and say what needs to be said, and share those words with our nation and the world.

So here’s what we do.

At EXACTLY 8pm on the evening of Friday, January 20th I’m asking all my friends and fellow writers and poets to simultaneously all post a poem or prose piece against the election and presidency of Trump. Post it on Facebook, Twitter, Tumblr, WordPress …

That’s it, that’s all we need to do but we must all be united in this protest.

No matter who you are, what country, what race or what nationality this is the moment to Stand Against Trump.

Tag the bottom of your posts with these words that say we stand together.

Please join me, spread the word and invite all other writers and poets.

“Not as we are but as we must appear,
contractual ghosts of pity; not as we
desire life, but as they would have us live,
set apart in timeless colloquy.
So it is required; so we bear witness,
despite ourselves, to what is beyond us,
each distant sphere of harmony forever
poised, unanswerable. It is without
consequence when we vaunt and suffer,
or if it is not, all echoes are the same
in such eternity. Then tell me, love,
how that should comfort us-or anyone
dragged half-unnerved out of this worldly place
crying to the end ”I have not finished.”

Till this very moment, by being the one who shall not fall nor rise, I have stood my ground in the kingdom of desire. No matter how bright the sun is, I seek no shadow. No matter how dark the moon is, I seek no fire. I hold my breath in a place where all should be received with gratitude as nothing is granted. I now live, for should a single leaf of mine fall or rise, I shall be no more. 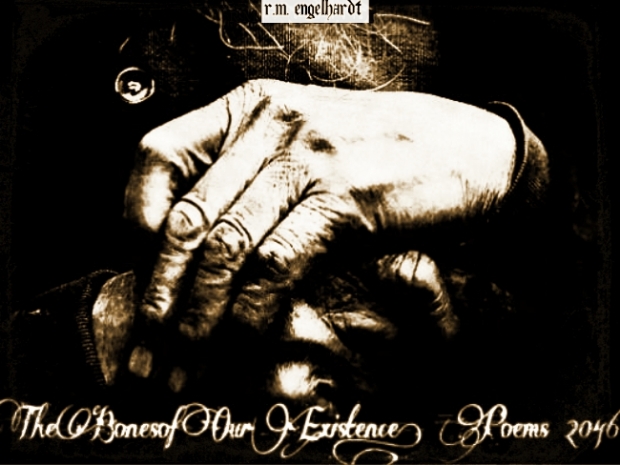 The Bones of Our Existence Book Release: March 15th, 2016 at 12 Midnight http://www.thepoemremains.com 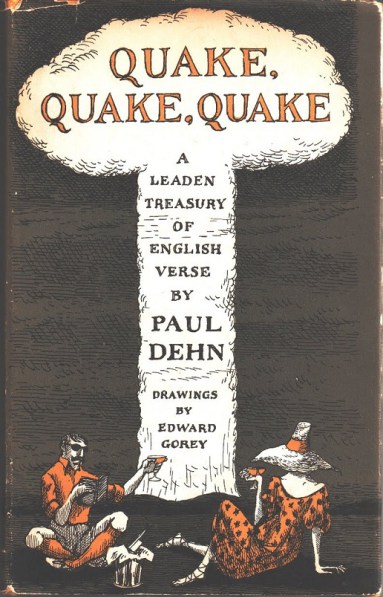 Although I’m not the first poet to ever write a book of post-apocalyptic poetry (The Bones of Our Existence) I can happily say that I have been preceded by such poets as the likes of Paul Dehn and even by a poem by Lord Byron called “The Darkness”. Here’s a great article on Paul Dehn’s book, a collaboration with famous artist Edward Gorey entitled “Quake Quake Quake”

The Apocalyptic Poetry of Paul Dehn

I can’t teach you how to write, and anybody who says they can is full of shit.”

George Sterling (1869-1926); King of Bohemia and central figure in the Californian literary scene of the early twentieth century. Pupil of Ambrose Bierce, whom he called “The Master,” mentor to Clark Ashton Smith, friend of Jack London, Robinson Jeffers and Nora May French.

Perhaps best known for his epic poems The Testimony of the Suns and A Wine of Wizardry (1907), to which Smith’s The Hashish-Eater would forever be compared, his prodigious output of poems, plays, essays and the occasional story appeared in twenty one volumes, numerous magazines and newspapers.

His work covered a broad set of themes and philosophies – from the romantic, in the tradition of Shelley and Keats, to the morbid gloom of Poe passing through the mystical and fantastic on the way. He tackled the (at the time) taboo subjects of incest and homosexuality while covering the current political and sporting news of the day.

Sterling committed suicide by taking cyanide in his room at the Bohemian Club on November 17, 1926.

As all good poets should be, he was a drunkard and a womanizer.

The children of the flesh of men,
They pass from night to night;
They weep and laugh and labor, then
Are lost to human sight.

Musing on such a fate, the mind
Stirs with a tragic sense-
So brave they walk the stage assigned,
So soon they hurry thence.

The children of the artist’s brain
Elude mortality,
O’er them Time swings his scythe in
vain,
Till time no more shall be.

In many hearts, in many lands,
They live again their tale,
As, young or old, the Future’s hands
Arise to give them hail.

As here the crafts of men assure
Their presence to the years,
So too shall Memory’s bronze endure,
With all their smiles and tears.

Such lives within our lives can be;
Such comrades Art can give.
Are men but shadows? is it we
Or they who truly live?

A Wine of Wizardry

Without literature, life is hell.”