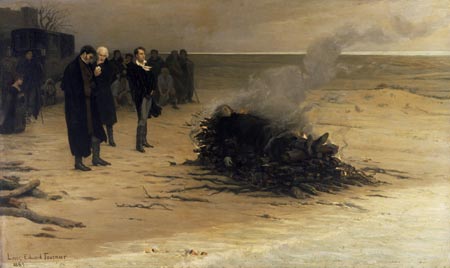 All the earth and air

With thy voice is loud

Death Is Here And Death Is There

I.
Death is here and death is there,
Death is busy everywhere,
All around, within, beneath,
Above is death—and we are death.

III.
First our pleasures die—and then
Our hopes, and then our fears—and when
These are dead, the debt is due,
Dust claims dust—and we die too.

IV.
All things that we love and cherish,
Like ourselves must fade and perish;
Such is our rude mortal lot–
Love itself would, did they not.

Today, in July 1822, Mary Shelley and Jane Williams awaited with weeping anxiety the return of Percy Bysshe Shelley, who, sailing from Livorno in his fragile craft, had come to shore by sudden chance among the silences of the Elysian Isles. – O blessed shores, where Love, Liberty and Dreams have no chains.”This unearthly legend had been built up steadily throughout the 19th century. Shelley’s wife Mary herself launched it, writing immediately after his death: “I was never the Eve of any Paradise, but a human creature blessed by an elemental spirit’s company & love – an angel who imprisoned in flesh could not adapt himself to his clay shrine & so has flown and left it.”

Shelley drowned in his own sailing boat, the Don Juan, while returning from Livorno to Lerici, in the late afternoon of July 8 1822, during a violent summer storm. He was a month short of his 30th birthday. Like Keats’s death in Rome the year before, or Byron’s death at Missolonghi two years later, this sudden tragedy set a kind of sacred (or profane) seal upon his reputation as a youthful, sacrificial genius. But far more comprehensively than theirs, Shelley’s death was used to define an entire life, to frame a complete biography. 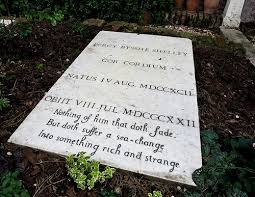 R.M. Engelhardt is a poet, writer and author who over the last two decades has published over 14 books of poetry including "Nod" "Logos" "Alchemy" & "The Last Cigarette: The Collected Poems of R.M. Engelhardt. The founder of the Upstate NY organization Albany Poets & the Annual Poetry Celebration The Albany Word Fest he has through his ideas & visions helped to contribute a large amount of advocacy and creativity to the Spoken Word~Poetry Capital District scene and is the former host of the long running readings Vox, Propaganda, Listen & currently is creating a new resurrection of one of the area's most well known open mics for poetry and spoken word THE SCHOOL OF NIGHT in Troy, NY held on the last Wednesday evening of each month at the incredible nightclub/speak easy bar THE BERLIN IN TROY NY. His writing has also been published by many journals such as The Rye Whiskey Review, Red Fez, Rusty Truck, Sure! The Charles Bukowski Newsletter, Thunder Sandwich, The Hobo Camp Review, Full of Crow, on the Outlaw Poetry Network & in many many others. Look for his books "WHERE THE PEOPLE'S VISION PERISHES 2020" "DARK LANDS (2019 on LuLu, Amazon & At Barnes and Noble) The Resurrection Waltz, 2012 ( Infinity Press) & "COFFEE ASS BLUES & OTHER POEMS" ( 2018 Alien Buddha Press 2018) " DarkLands" 2019 & "Where There Is No Vision" 2020 all on Amazon.com www.rmengelhardt.com www.albanypoets.com www.gentlemanoutsider.com *All Poems, Writings & Information Contained On This Blog Are The Property & Owned By The Author R.M. Engelhardt. © 2021 www.rmengelhardt.com View all posts by R.M. ENGELHARDT POET AUTHOR WRITER